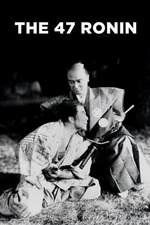 This is a really interesting samurai film in that it's based on a play that adapted a real event and that it was commissioned as a wartime propaganda film. Mizoguchi made a more humanistic story, though.

The 47 Ronin is mostly characters discussing what is happening and what they plan to do next. There's a lot of talk about the samurai code and what it means to honor who you serve.

There is very little (almost no) action in the film, which was kind of surprising. Big moments are told to us through dialogue in a way that feels like you're watching a stage production. It's a nice touch.

The second part is the better half of the movie. It all leans to a somber, yet contemplative end.

Overall I liked The 47 Ronin. But I'd be shocked if I ever allocate another 4 hours to watch it again.