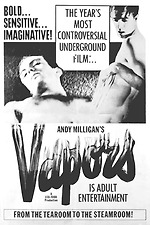 After the coded gay subtext of The Strange One (1957) I was in the mood for something explicitly gay.

Andy Milligan's debut short, Vapors, is a two-hander that takes place over the course of an evening in the St. Marks Bathhouse (although it was not actually filmed within those storied walls). A youngish man named Thomas (Gerald Jacuzzo), who is shyer and more reserved than the boisterous regulars, waits in the room he's rented in his rented bathrobe, surrounded by pornographic graffiti. He's cautiously approached by an older middle-aged man who is even more reserved (played by Robert Dahdah). It's his first trip to a steam bath.

Vapors is not a sexually explicit film, but it is highly erotically charged. Over the course of 30 minutes, the two men reveal things to each other that range from the prosaic to the profound. This is a movie that is as much about sexual longing as it is about death and loss.