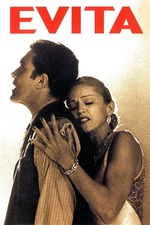 A rather boring musical with few memorable songs.

Alan Parker’s historical musical Evita (1996) is a curious piece of cinema as it’s not a very entertaining musical as Andrew Lloyd Weber’s songs are not very memorable. Parker’s direction is beautiful with pretty shot choices and a warm tone to Evita. His stylish direction keeps you engaged throughout and helps you focus on the various historical information presented.

My issue with Evita is that it fails as a good musical because Andrew Lloyd Weber wrote some gorgeous symphonic melodies with terrible progressive rock attempts that sound dated and shallow. Some of his rhythmic runs are very awkward and it was clearly hard to sing to his strange timing for certain songs. Tim Rice’s lyrics are very bland and not as historically informative as I’d hoped. He doesn’t even rhyme very often, ensuring that Evita’s songs remain forgotten for the most part.

Madonna is captivating as the lovely Evita Peron, but she’s so convincing as this darling of Argentina that it overshadows the fact that she was a propaganda pawn of a fascist government that took power by force. Madonna sings beautifully, but Weber’s lackluster music doesn’t let her properly shine as the pop goddess she has proven herself to be at her peak.

Antonio Banderas sings well as the narrator and he’s important to tell the audience what Eva’s life was really like and what it meant to the poor citizens of Argentina. He’s very fun and powerful, but there should have been more of an emphasis on how Evita slept her way to power and manipulated men and civilians into believing her con. Maybe she was a better actress than people gave her credit for as her cunning led to the rise of a dictator and kept him in power through shallow PR moves, all while spending the country’s money on herself and decadence.

Jonathan Pryce is fine, yet completely sidelined as Juan Peron. His character grossly gets placed up as a romantic lover instead of a manipulative, evil dictator. So much of history gets lost in the musical passages, yet much of the musical distracts from ever truly informing the audience about the historical importance of Evita.

In all, I think Alan Parker sadly missed the mark here.