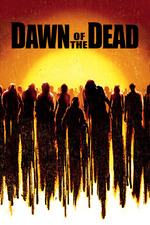 I watched the new bluray from Scream Factory. The first bluray release of this flick is one of the movies I always pop in when I get a new TV because it looks so damn good. Somehow they improved on that and this release looks even better.

The original Dawn is my favorite movie of all time. The greatest film ever made in my opinion. So when this was first announced I thought what many did. Sacrilege!! However like the best remakes out there, it did what I think a remake Should do. Take the basic premise of the original (zombies...survivors in a mall) but then make your own movie with it. If you have too many things to compare to the original like an actor playing the same character or an updated version of a set piece, you’ll always compare it to the original. This is its own thing. It goes the opposite route of the original and makes it a fast paced zombie/action flick. And I think it’s pretty fucking perfect. It may have the name of Dawn of the Dead, but like Carpenter’s The Thing, I don’t need to compare it to the original. I know fans can’t get past that but I love both.