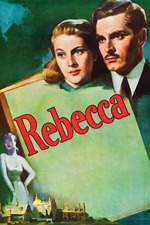 Q: Who is your favorite cinematic ghost?
A: Mrs. Danvers from Rebecca.

Q: Not Patrick Swayze, or Beetlejuice, or someone from The Others or The Sixth Sense? Casper, maybe?
A: No, no. It's Mrs. Danvers.

Q: She's not a real ghost, though.
A: Well, she arrives and leaves very suddenly, as if from nowhere, and she always glides. Oh! And she never blinks!

Q: If Mrs. Danvers is a ghost, then when did she die?
A: She dies multiple times—don't we all die a little every time we get our hearts broken? But I would say she really died when Rebecca died, and now, Mrs. Danvers lives only to preserve Rebecca's memory.

Q: You seem to care strongly about Mrs. Danvers.
A: I do love her deeply. Despite being a ghost, I think she is the most human character in the film. She reflects our faults and weaknesses, but also our capability of loving someone fiercely and irrevocably.

Q: Do you relate to Mrs. Danvers?
A: Quite a lot, actually.

Q: Care to elaborate?
A: Not particularly. I'd rather not reveal Mrs. Danvers' secrets. They should burn away with her embroidered love and its memories, forever living as a spectre.