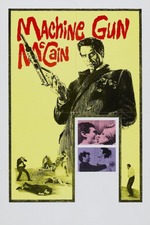 Released from a 12 year sentence for armed robbery Hank McCain (John Cassavetes) is met by the son he'd only ever seen twice before and immediately pulled into a scheme to rob a Las Vegas casino.

Meanwhile Peter Falk's mob boss is attempting to move in on the very same casino despite specifically having been told to stay clear of Vegas. The two things, it turns out, are not unrelated.

Despite sounding like a story from the golden days of hoodlum gangsters this is a contemporary piece produced by the Italians, a sort of proto-Eurocrime movie, before they had the confidence to produce such films on home soil.

As well as lining himself up a job McCain has also very quickly picked up Britt Ekland's Irene, apparently a model, but the type of one who hangs out in casinos getting men to buy her drinks. And the next thing you know the two of them are married, which feels oddly rushed. In fact things in general seem to move on quite quickly while at the same time managing to drag, as if they don't know which parts of the story need moving on and which need time to play out.

McCain turns out to be something of a one man army, taking the entire robbery on himself while creating havoc across the city and Irene turns very quickly to a life of crime before we get into a prolonged chase sequence which ends up with McCain meeting up with his former partner in crime Rose (Gena Rowlands) who's barely in the picture making you wonder why they bothered at all and whether having the pair of them perform the robbery might not have made for a more interesting story.

I was also left wondering about what seemed to be the film's tenuous grasp on US geography as it bounced from San Francisco to LA to Vegas as if they were all next door to one another.

The Sound of Fury