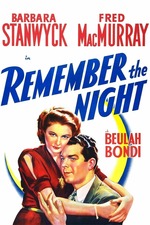 Lee (Barbara Stanwyck) is in court having been caught with stolen jewellery and John (Fred MacMurray) is the prosecutor who, on the verge of Christmas, knowing that juries are sympathetic so close to the holidays, allows the defence attorney to put himself in a position where John can get the case postponed until the New Year when he knows he will have a better chance of a successful prosecution.

But his conscience quickly gets the better of him and he arranges for her to get bail so she won't have to spend Christmas in jail. However the bail bondsman dumps her on him and soon she's tagging along on a trip to see his family, stopping off at her family home to find out that she's still just as unwelcome there as she was when she left there years ago.

Needless to say the two of them fall in love and John is quite prepared to put his career on the line in order to make sure that she doesn't get convicted. And do you know what? I would too, for Barbara Stanwyck.

For me one of the few delights in what has, let's face it, been a pretty crappy year all around, has been the revelation that Barbara Stanwyck is utterly fantastic and I mean bewitching. It's not just that she's so beautiful, she really can act. And this is a wonderful, quiet performance, it's not showy or flashy, she does just enough to show exactly why MacMurray's character is falling hook line and sinker for her, and no more.

Because this is not the screwball comedy you might imagine it to be, she's not some kind of Manic Pixie Dream Girl leading the man astray, having her play the master manipulator would have been obvious, but that isn't the way the film goes, this is pure romance and in a good way. Yes of course there's sentimentality, but you not clonked over the head with it and in fact more than one the character recognise that throwing everything away for what seems like love, isn't necessarily the right thing to do.

But then again, would throwing everything away for Barbara Stanwyck be such a bad decision?

Christmassyness: 6/10. Christmas is intrinsic to the movie's setup but at the heart of the film it's a romance and that has nothing to do with the time of year.