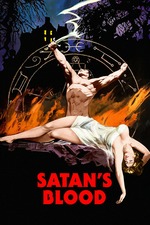 A young married couple are approached by another couple, claiming that the husbands went to school together.

Even though the guy doesn't recognise the man who says he's an old friend, they go along with it and go back to the couple's house where they somehow become trapped and become involved in a Satanic ritual.

First of all you can skip the first 5 minutes which consist of some alleged academic telling you that satanism is real, followed by a demonstration of a ritual which consists mostly of breast fondling with a little bit of murder thrown in at the end. I'm pretty sure it has no bearing on the story which follows, so forget about it.

This is in a many ways an infuriating film, not only because of the actions of the lead characters which will often have you shouting at the screen , "WHY DON'T YOU JUST GET IN YOUR CAR AND LEAVE?" But also because it comes so close to being something really great but just consistently manages to miss the mark.

The big issue here is the way in which the couple act and react to their situation, for some reason they are taken in by this new couple and find themselves staying the night. Why? I don't know. Later they find themselves wandering downstairs to find their hosts naked, carrying out some ritual in a pentagram and instead of running for the hills they join in whereupon we get to witness lots more breast fondling which, by the evidence here is a large part of Satanism.

What the film doesn't make clear is, I assume, that they are in some way hypnotised, I say this because they don't seem to acknowledge or refer to these goings on after the fact. And yet they don't seem to be in thrall of their hosts at other times.

In short it's not entirely clear what is supposed to be going on and I rather feel that if that had been the case, and it could have been done with a few subtle changes, we might have had something really special.

Instead we have something which is by no means uninteresting but doesn't quite hit the bullseye and you're left wondering what might have been.