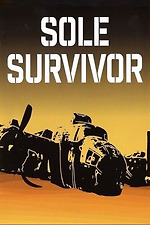 Eighteen years after it was lost during a bombing raid an American bomber is found in the middle of the Libyan desert, 700 miles from where it was supposed to have ditched in the Mediterranean, and the one survivor, the now General Hamner is called to visit the crash site with a team of investigators.

What they come to learn is that Hamner (Richard Basehart) bailed out over the sea and left the other men to fly on to their deaths. And what we know is that those men are still there with the plane, trapped in a kind of purgatory, filling their days playing baseball and not even certain about the exact nature of their existence.

While Hamner tries to hold to his original story, bluffing and even issuing veiled threats to the officer who is daring to challenge his story, his flight crew are forced to stand by helplessly, trying to think of any way they can make the truth known. That brings up the interesting prospect that they may be able to influence physical objects, although trying to make their way to the place where they they know their bodies lie only has them ending up back where they started.

Meanwhile there’s William Shatner, doing his own thing as the investigator whose only intention is to make sure that the General’s story is confirmed and no boats are rocked, regardless of the evidence. Occasionally he falls. Into. That. Staccato. Line. Delivery. That. We. All. Know. So. Well. And he has a fantastic way of tearing off his sunglasses for dramatic effect that from now I intent to employ at ever given opportunity. He dodges in and out the story so he doesn’t have the chance to overbalance things.

Another top notch example of one of those slightly weird US 70s television movies.