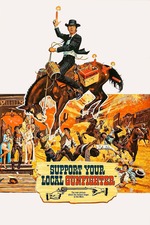 I rather like the Carry On method of producing a sequel, not to basically remake the earlier film, but to take much the same cast of actors and place them in a different scenario.

Although it has to be said it's not a very different scenario, like Support Your Local Sheriff this is obviously still set in the wild west and has James Garner rolling into town short on cash (at least he is after a visit to the roulette wheel) and falling into a role.

Actually this time he persuades newly found sidekick Jack Elam to pretend to be legendary gunfighter Swifty Morgan that everyone assumes Garner's Latigo Smith is, called in by one of two sides fighting to dig underneath the town of Purgatory in order to reach an apparent mother lode.

As well as the aforementioned Garner and Elam we also have Harry Morgan, Henry Jones and Kathleen Freeman in returning roles while this time around Suzanne Pleshette is the love interest and the likes of Dub Taylor and John Dehner are drafted in to the cast.

It's not quite up there with the original, it's generally more ill-tempered, Garner's character doesn't suffer fools gladly and isn't afraid to show it and every other line uttered by Harry Morgan is shouted at full blast. Having said that these are not bad things, but like the characters it makes the film slightly less easy going fun.