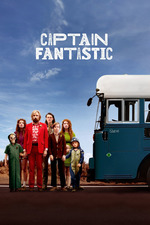 Not much more than a shining showcase for Viggo Mortenson's incredible capacity for self-doubt, reasonableness and hardness; Captain Fantastic is almost great. The set-up is all there, the film being an examination of decision-making and parenting, but Ross fails to say anything that meaningful. There's touching moments, sure, but they are only touching because the film beats the Dad over the head for much of it's run-time it feels invigorating to see him win one. It drowns, somewhat, in it's eccentricity, the quirkiness that really defines these people's lifestyle. In summation, the comedy works better than the drama. The first half, when Ross is largely just exploiting these odd people for laughs, is far superior to the sincere second one. The film grapples with itself on where to fall on this lifestyle, awkwardly transitioning from maligning him to celebrating his uniqueness. There are some things to treasure in this very indie flick, though. The celebration of intellect was nice, and little touches like "Noam Chomsky Day" had me dying. This is a solid film that doesn't quite know how to reel it's thematic content in, but it's a lot of fun watching it try.