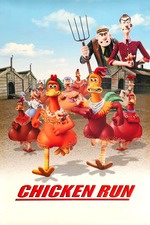 Despite it's simple premise, Chicken Run is surprisingly intelligent for a children's animated film, managing to simultaneously parody prison escape films and still show a wonderful affection for them. It's humor is both witty and stuffed with cultural references, and there are a number of recurring gags that continually work. The animation is entirely unique, and warrants a watch just for that. The chicken's toothy grins and plumpy bodies are hilarious throughout the entire film, which is sort of a feat in itself. The action scenes are surprisingly spectacular, and the voice acting stellar. There isn't much to say about this film except that everyone should see it. Despite it's chicken characters, it's more human than many of the formulaic comedies we get today, and it's superbly entertaining for both the adults and the children in any family, meaning it deserves to be held up with the best animation has to offer.