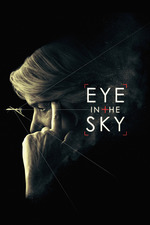 Eye in the Sky

Those who trade liberty for temporary security don't deserve either.

Assuming Eye in the Sky was created with the intent to reflect real life scenarios involving drones, it fails almost entirely. As a film? It's pretty good. The cast is uniformly solid, the direction is taut and suspenseful, and the issue is a compelling one. As a film, it works. As a poignant piece of political commentary, not so much. So proceed with caution, because the following write-up is a critique more reflective of my political beliefs than a film lover's opinions, so take that with a grain of salt.

Drone strikes are not this black and white. The only gray area here is the presence of one small child, a potential collateral death that may or may not be justified for "the greater good". Drone policy differs between the US and UK, but I feel this film strove to encompass some universal humanity as a justifier, so in my mind this can be disregarded. A drone strike is the only answer here. No other avenues of apprehension are explored, the film simply believes that a Hell-fire missile to the face is the only answer to an imminent threat.

Drone strikes detach the murderer from the victim. This is both good and bad, but the fundamental issue here is that the Patriot Act, passed as a reactionary and impassioned response to 9/11, throws out a person's right to a trial if they are found supposedly aligned with a known terrorist organization. Eye in the Sky presents a scenario with clear beneficial casualties, as well as clear negative casualties. Terrorists are painted as clearly evil, deserving of death. The innocents, namely this little girl, are the only detractor from a successful strike. Actual strikes are not nearly as "sure thing" as this, as recent reports have shown authorities often are not even sure of a victim's identity prior to a strike. Modern statistics indicate a varying ration of terrorist/civilian casualties, but reputable sources have confirmed that up to 80% of the casualties inflicted are civilian. As a reaction to this era of drone strikes, terrorist groups have made a point to integrate citizens heavily into their numbers. The fact is that in the real world, the US wouldn't bat an eye at one collateral casualty. Neither would the UK. This scenario painted before us is fantastical, a dream compared to some scenarios presented to actual governments.

Perhaps an even larger factor discrediting this film is it's treatment of politicians. The military representations in this film, Helen Mirren and Alan Rickman, are clear-headed. Voices of guidance and confidence, boasting a supposed rationality to these moral conundrums. Politicians, on the other hand, are spineless. Always putting the weight of the decisions that need to be made off on the chain of command. Sweaty, twitchy and malignant, it's an unfair portrayal of a group of people that are almost universally despised. A line I cringed at in this film, delivered by Rickman, essentially states that the military are the decisionmakers, and the politicians are there to clean up the mess afterwards. This, and a key order given by Helen Mirren, assert that the militaristic minds are the only rational ones in government. Protocol is disregarded and policy is sidestepped here, an appalling portrait of a government making decisions with zero checks in place to stop them.

I could go on, but needless to say I feel this film is masquerading as some level-headed, sharp piece of political commentary. But really, from my point of view, it's a juvenile, idealistic portrayal of a decision-making process that encompasses more than just one little girl's life. It's simplistic and pandering, clearly influencing the audience to yearn for the trigger to be pulled. The drone issue is a loaded one, with decades of legislation and scores of justifications to sift through in order to form a legitimate argument. To many, my rant will be deemed idiotic. Someone else could likely make another one with very different points, but preaching the same message. That message? That Eye in the Sky is a child's musing on an adult's issue, ineffective intellectually but admittedly pretty tense in execution. It's a film with an agenda that pretends to have none. No film has evenly conveyed this issue, and perhaps none ever will. But this effort is not good enough. I would love if drone-warfare was a black and white as this, but the sad reality is that it really isn't. The film plays on sentimentality and simplicity, and will have you rooting for the bombing of a little girl.

Batman: Mask of the Phantasm