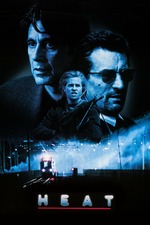 Film #9 of My Definitive Ranking of Michael Mann

Cause she's got a great ass!

The 1990's were arguably the golden era for scenery-chewing actors. Unsubtle and bold, it was a trend that is easily reflected in the best actor wins from that decade. This is what you'd expect from Heat, a legendary pairing of two of history's most intense and strong actors in Robert De Niro and Al Pacino. You'd expect the film to feature many more collisions between the two powerhouses, but rather than exploit that talent, Mann instead vies for parallelism between the two. Further, De Niro's performance is relatively subdued compared to his earlier work. Yes, there are big moments to be seen, but for the most part, his character is defined by loneliness and professionalism. Contrarily, Pacino has many big moments, most notably when he screams about a woman's ass with enraged enthusiasm, but his character is a quiet man, and is more subdued in the crucial moments in the film. But the key point I'm making here is that for a film that boasts Pacino and De Niro as it's leads, it has a remarkably sprawling focus, with numerous characters and many subplots to balance within a sub-three hour runtime. Every character has a somewhat emotional narrative hiding behind his/her crime career, and this is what makes Heat great. It's not really a heist thriller, nor an action film. It's a mood piece, a character study intent on humanizing these criminals in a way that actually gets at some fundamental truth about the often brought up but never explored idea that the hunted and hunters are different than us.

Heat is a film about professionalism. This is evident from the convictions of our two main characters, and even through Mann's directorial decisions. The heist scenes are shot with a cool visual logic, completely cohesive and explanatory; easy to understand. This is largely because the criminals are in control, so this is reflected in their actions. When their plans fail and failure is a possibility, it gets messy. It's a film of contraries. Cop and crook, Pacino and De Niro, order and chaos. This the crux of the film, the cost of committing yourself with every fiber of your being to one thing in life. I think the real tragedy of the film is the realization that neither Hanna or McCauley, no matter the circumstances, will never be as complete or belong as much as they did when they were running across the LAX runway. Family just isn't in the cards for them, despite their best efforts to create one. Their life is crime, depravity and survival, and the only result of deviation from that formula is hurting the ones they love.

The conclusion of Heat is one of the best I've seen, because it so perfectly encapsulates the film as whole. It's set in a location that maintains the grittiness of the rest of the film, but still feels transient, somewhat alien. It plays out so predictably but still cuts you to your core, and the final shot is one of the most profound moments of visual poetry to come out of film so far. Heat, despite his stacked filmography, is Mann's best film. A classic of 90's cinema.