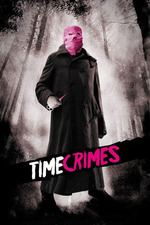 Tackling time travel with a complete lack of special effects, four speaking roles and one location requires audacity, something director Nacho Vigalondo has in excess. In Timecrimes, he constructs an economical and bizarre narrative, executing it in a very frantic and disoriented fashion. He never abandons the momentum of the film, careful not to allow us (or Hector) time to pause and contemplate the logic of the film. His resolute acceptance of everything going on around him is central to to the film's success, as it acts as a sort of MacGuffin to the questions that often plague time travel centric films. The film is unpredictable, tightly crafted and utterly compelling; like being in a haunted house and hitting walls where there should be doors and vice versa. There's an interesting balance struck between choice and fate, and seeing Hector struggle with this is what separates the film from others of it's ilk. It's a perfectly achieved blend of dark comedy, surprising thrills and mildly disturbing gem from Spanish cinema.