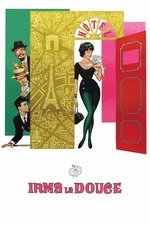 When I was young - perhaps 10 - I watched this film on television. I can't possibly have understood what was going on in it; I would have been horribly shocked and offended at that tender age. Now, in adulthood, I find this movie amusing and yes, a little sweet.

Jack Lemmon plays Nester Patou, a French policeman who is fired from his job after staging a raid on a brothel frequented by the cops. Returning to the red light district in Paris, he inadvertently gets the best of Hippolyte (Bruce Yarnell) in a bar fight and becomes one of the most respected pimps in the neighborhood. But he only has eyes for Irma La Douce (Shirley MacLaine), a popular prostitute who becomes his meal ticket. But Nester doesn't want Irma seeing other men, so he must concoct an elaborate scheme, in which he impersonates a British man, Lord X, who pays Irma generously to simply pay cards with him twice a week. To accomplish this, he must live a double life, taking menial jobs by day to pay for Lord X's outings. Eventually, all of his lies will catch up with him . . . and what will Irma think of him then?

"Irma La Douce" is a silly farce. Directed in broad strokes by Billy Wilder, shot through with bright colors and based on a popular musical, this movie reaches heights of absurdity to which most comedies only aspire. Lemmon and MacLaine are pretty fun in their respective roles and they have a decent yin-yang sort of chemistry. And although the musical numbers were cut out for the screen version, the movie still has the heightened melodramatic appeal of its source material; the unreality of a Broadway musical production.

From time to time in re-watching this film, I was aware of how dark the premise and the milieu of the movie actually were. Jokes and slapstick aside, these characters are living in the slums of Paris. The story deals with death, sex, love, truth, lies and imprisonment. I shouldn't be laughing.

Or should I? Sometimes artists use humor to help us deal with topics that otherwise would be too harsh. The pimps and prostitutes of Paris are just people trying to make their way in the world - no better or worse than the rest of us sinners, even if their failings are more obvious to the outside world. And when love enters in, it can break down doors that had never before been opened. Even those between a legalistic cop and a footloose hooker.