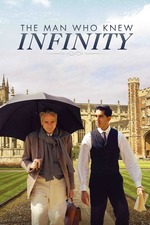 There’s a comedic video that made the rounds on the internet a few years ago that was designed to replicate the trailers for movies that are trying too hard to win Oscars. The short film is hilarious. But the reason satire like that works is because too many award-winning movies look all too much alike.

Case in point: “The Man Who Knew Infinity,” a biopic about Srinivasa Ramanujan (Dev Patel), an Indian mathematician in the early 20th century. Ramanujan lives in obscurity in Madras, India, but his employer notices he has a talent for math and assigns him to do some light accounting for the firm. It becomes clear that his talents go far beyond mere bookkeeping however and, with the encouragement of some friends, he begins to send some of his more theoretical mathematical ideas to professors in England just to find out if anyone might be interested in his work. G.H. Hardy (Jeremy Irons), a famous mathematician at Cambridge, sees something in his scribblings, and invites him to the UK to pursue further work. While at Cambridge, Ramanujan experiences successes, failures, racial and academic discrimination, and health issues.

All of the elements of an award-winning movie are here: Period sets and costumes, prestigious British actors, a true story, potential tragedy, and a rags-to-riches tale. This one probably got pitched to some studio executive as “A Beautiful Mind” meets “Slumdog Millionaire.” That’s just the problem though. The film is too conventional and too derivative to find its own voice.

There is a lot in the movie that is well done. The sets, costumes, and cinematography are actually pretty good, in a Masterpiece Theatre sort of way. Jeremy Irons provides a solid and nuanced performance, even in a somewhat paint-by-numbers script. I am less bullish about Dev Patel, an actor who I have often had mixed feelings about. Here, he feels a bit one-note. Toby Jones is fantastic in a supporting role as another faculty member at Cambridge.

Ramanujan was clearly an incredible talent, and the core story of his life provides rich dramatic material. But the beats of the story, as handled here, are incredibly predictable. It is hard to discern exactly what the filmmakers want us to remember or take away from this narrative. A more artistically daring take on this tale would probably have featured a stronger point of view, and left us with something more to chew on. As it stands, we are left with a conventional tale of one man’s individual brilliance, colonial arrogance, and what feels like a craving on the part of the filmmakers to be recognized for their good work. Or perhaps they simply wanted to avoid screwing things up.

Like its titular subject, this film could have benefited from taking a few more risks.