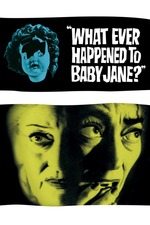 This is undoubtedly one of the stranger films I have ever seen.

"Baby" Jane Hudson was a child vaudevillian star. But as she grew older, her sister Blanche, eclipsed her in talent and fame. Blanche is involved in an automobile accident that leaves her in a wheelchair, without the use of her legs. Now quite a bit older, Jane (Bette Davis) takes care of Blanche (Joan Crawford), the two of them holed up in an old Hollywood mansion. But no love is lost between them, and eventually Blanche realizes that it is not safe to remain in Jane's care.

This movie is campy and over-the-top. Davis hams it up like nobody's business. Crawford plays a tortured soul, waffling between her resolve to get out and her horror at her sister's cruelty and power over her. Add in a desperate musician (Edwin Flagg) who comes to the house trying to make a fast buck as Jane's accompanist, nosy neighbors who won't let well enough alone (Anna Lee and Barbara Merrill) and a maid who smells a rat (Maidi Norman) and you have the makings of an old-fashioned pot-boiler. What starts out as mere psychological horror turns into torture and dead bodies that need to be disposed of and more. The whole thing plays like "Psycho" meets "The Belle of Amherst" by way of "Misery."

For what it is (e.g. a campy, hokey thriller) I think this movie is well done. Did I enjoy it? I don't know. It made me uncomfortable and occasionally my skin crawled. So from that standpoint it achieved its purpose. The ending is bizarre, a bit ambiguous and ultimately quite sad. The audience realizes how far Jane has broken from reality and we almost feel sorry for her. An empathetic moment such as that is a credit to the filmmakers and especially to Davis' performance.

My biggest complaint with the film is probably that the styles of acting employed by the two leads are SO different. It is almost as if the two of them were acting in different movies and that the director and editor then spliced footage of the weepy, melodramatic Crawford in with the raging, campy Davis.

Nonetheless, Baby Jane was once named one of the top screen villains of all time. If nothing else, one should see this movie to watch a legend at work.