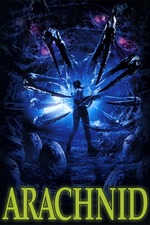 Arachnid was produced by Fantastic Factory, a short-lived Spanish production company co-founded by American horror director and producer Brian Yuzna. In the 2000s Fantastic Factory released several low-budget horror movies. One of them was Arachnid, which was directed by Jack Sholder. Sholder achieved some acclaim among genre fans with his 1987 Sci-Fi Thriller The Hidden, that provided a comedic take on the Alien Body snatcher theme. After that, he directed mostly lower grade movies, and Arachnid was his second-to-last movie he made as a director until now.

If you think Arachnid is another run-off-the-mill B-monster movie, you're absolutely right. There's zero originality in the plot, the characters are as one-dimensional as they can get and have nothing meaningful to say. The beginning of the movie is quite wacky, after watching the first five minutes, one may think that you're in for a giant schlock fest. The movie actually takes a more down-to-earth approach after that, but it's quite a strange opening sequence that is not really followed up in any way. The movie follows the usual monster horror movie structure and in general is fairly dumb, with a couple of scenes that are bordering on trash.

Nevertheless, there's a few things that make Arachnid a halfway decent affair. It hits quite a few lows in quality in several scenes, but there's always something going on, so at least it never gets boring. The setting of mixing the dangers of the jungle with giant spiders and insects has been used before many times, but it is staged relatively well in Arachnid. Exploiting people's somewhat innate tendency of disgust for small, leggy insects or spiders always works. This can always be utilized for a couple of good scares, if at least the monsters look convincing enough. And they do. The practical and prosthetic effects are pretty good, and are the main item that save the movie from being unwatchable. There's not only spiders, but also a bunch other nasty giant critters that attack and infest the protagonists. On top of that we get plenty plenty of slime, blood and giant cobwebs for good measure.

Arachnid is a fairly mediocre creature horror movie with a bunch of well-done disgusting scenes. It's not a memorable affair, but there's certainly worse ways to waste 90 minutes of your time.