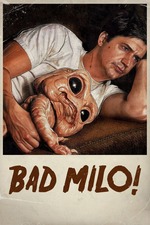 Psychological stress and burnout syndrome are topics that are receiving relatively little attention as themes in genre movies. Horror movies often deal with more extreme psychological disorders, and those usually serve only as a justification to display all sorts of mayhem on the screen. Bad Milo provides a different and refreshing take on the whole matter. The idea that a part of one's own body becomes autonomous and then goes on a killing spree has only been sparsely explored before, mostly in the context of conjoined twins. Examples are the X-Files episode "Humbug", and the schlock classic Basket Case.

The premise of the movie is that Duncan's unresolved issues manifest itself physically as a (arguably very cute) monster that removes the sources of Duncan's stress in a way he never could. This concept is revealed early on in the movie and openly discussed, even analyzed throughout the course of the movie. The sequences with Duncan's psychotherapist Highsmith have a central role, as the discussions there provide the catalyst for almost anything else that happens in the story, especially Milo's violent escapades. The movie ultimately gives a fairly positive impression of psychotherapy, as Highsmith remains benevolent and supportive of Duncan even when all hell breaks loose. The charming portrayal of Highsmith by Peter Stormare as slightly eccentric, but well-meaning aide only adds to that perception.

The situations Duncan finds himself in are fairly archetypal problems of middle-class people in the Western world. Duncan's stress triggers are presented in a pretty absurd but also tragicomic manner, and many viewers will be able to sympathize with Duncan's ordeal. The portrayal of these issues is simple, but actually a lot more believable than what you're getting in your average A-list Hollywood drama, as Duncan is dealing with very down-to-earth challenges. In addition to the manifestation of Milo from Duncan's colon, there's a bunch of other allegories on psychological themes, and they all work surprisingly well.

Despite some killings that are staged in excessive amounts of blood, Bad Milo is not really a horror movie. There are some scares, but they are more than compensated by an overabundance of humor. The sequences at Duncan's work are particularly well done, and also serve as an appropriate satirical take on office culture. The movie is a fine example that the best ingredients for a good movie are a clever idea, a proper script, and dedicated actors. Extra credits go to the puppet creators of Milo that looks cute and creepy at the same time.

Bad Milo is an emphatic movie about the troubles of over-stressed people, with a seemingly ludicrous but ultimately clever premise. It effortlessly strikes a balance between emotional depth, carnage and off-the-wall humor.