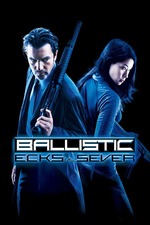 The imdb site for Ballistic: Ecks vs. Sever shows that the movie has the questionable honor of being part of the 100 bottom rated movies. I will certainly not defend the movie zealously, as there is a very understandable perspective that this movie is an abomination of action cinema. While I can relate to this view, I will try to argue why it’s an entertaining piece nevertheless.

Three minutes into the movie cars start getting blown up. This marks the starting point for a display of havoc wreaked on the city of Vancouver that never stops until the end of the movie. The movie had a decent budget of 70 Million US Dollars, so we get plenty of large set pieces for the action scenes. And if you have a fetish for cars getting demolished and exploding, Ballistic is high up on the list for this type of movies. The top position of car demolition movies is firmly still held by Bad Boys 2, though, with no serious contender having emerged so far.

A benevolent characterization of Ballistic might be that it is a medley of 1990s action movies, and which pays homage to the era of live staged pyrotechnics and demolitions at a time when CGI were in the process of taking over the special effects of big-budget movies. The action choreography in Ballistic is not of the highest level, though. There lots of cuts and choppy sequences, more spectacular stunts are avoided, and the explosions and shootouts are also fairly static. But there’s just so many of it, that the adrenaline level stays high despite the flaws in how the scenes are displayed.

Non-stop action in blockbuster-budget productions has only worked convincingly for a handful of movies. Speed, Black Hawk Down, Shoot ‘Em Up and a few others worked so well because they cared about their characters and had a simple premise that was followed through consequently. Ballistic clearly fails in these departments and will thus not be remembered as a prime example of this category of action movies.

No effort was made to develop a coherent plot (don’t even bother to follow it), or to motivate the actors to act out their roles convincingly. Lucy Liu’s performance is somewhat noteworthy, though. She spends most of her screen time shooting, kicking, stabbing or running, that alone makes the movie already worth a watch.

Ballistic: Ecks vs. Sever is an extremely uninspired action thriller with a confusing plot, and senseless action and violence. These points are not necessarily a negative thing if you can forgive the movie it’s numerous flaws and are easily entertained by car stunts, explosions and gunfights that are delivered almost continuously on massive scale.