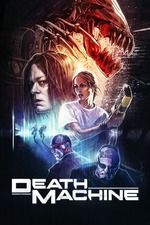 Stephen Norrington worked as special effects creator for a bunch of popular genre movies in the 1980s and early 1990s, such as Aliens and Gremlins. Death Machine was his debut as a director. He went on to make the vampire action movie Blade which has become a genre classic. After that, he directed the wacky The League of Extraordinary Gentlemen, which apparently was his death sentence as a director, as since then he did not get the opportunity direct any other movie.

Death Machine is an unashamed rip-off of many Sci-Fi movies that came before it, and it is displaying this stigma proudly. Just categorizing it as a mindless clone would not do it justice at all, but the list of building blocks that are inserted from other movies is indeed long. The cyborgs are taken from Universal Soldier and Robocop, the cyberpunk aesthetic from Blade Runner, and the monster looks like a hybrid of Robocop's ED 209 and the Alien. Even some of the main characters are named after well-known genre directors, and occasionally it seems as if entire sequences were copied from other movies. Death Machine arrived at a time when the majority of classic genre hybrids between action, horror and Sci-Fi were already made, so maybe the time was just right for a medley like it.

Despite the absence of truly original elements, Death Machine has a lot to offer. While the movie does not look like it had an extraordinary budget, one barely notices it as the set pieces are put together clever and the tempo is high, so there's not much room to notice details. The setting of the office building is chosen well for budget reasons on one hand, as it allows for many close-ups. But it also really conveys a claustrophobic atmosphere for the most part, and the Corporate tower is presented to the audience as a weird, creepy place. The special effects of the monster that lends the movie its name are certainly noteworthy, the mechanical design and animation look very dynamic and terrifying.

In general, there are two types of scenes in the movie: There's either people hysterically yelling at each other, or there's all sorts of mayhem displayed on the screen. The action is staged very fast-paced and violent. Occasionally things get so hectic and stroboscopic that it may actually create slight discomfort for the viewer. As for the actors, Brad Dourif shines as usual in the role of the evil madman, whereas Eli Pouget gives an energetic performance as his adversary that tries to get out of the building alive. Everyone else gives similarly over-the-top performances that fit the tone of the movie. Everything about Death Machine is pure escapism, there is zero deeper meaning to anything that’s going on. Thankfully the movie is far from taking itself seriously at any point, there's plenty of campy humor and silly one-liners. It clocks in at a solid two hours, and it does not feel stretched.

Death Machine is a highly derivative, but flawlessly executed Sci-Fi action movie. It's an ultra-violent spectacle, and on the whole a quite impressive debut from Stephen Norrington.