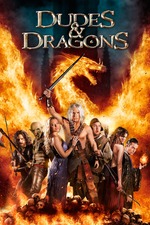 The epic fantasy genre with its often overly melodramatic stories and cliche-ridden characters should be fertile ground for parodies. Not many movies have made this attempt yet, though. The short list of recent works I could come up with consists of Your Highness and Ronal The Barbarian, which arguably were worthy entries depending on what type of humor you appreciate. So maybe there was no need for another contribution to this category, but I believe Dudes and Dragons has enough going for it to constitute a worthy addition.

Dudes and Dragons was released among an avalanche of low-budget fantasy movies that have been made within the last 10 years or so. The vast majority of them were sloppy and uninspired affairs, and there is rarely a representative from this genre that manages to stick out positively. Dudes and Dragons does, and has a lot more to offer than the usual scenes of people running through a forest in lackluster costumes wearing cheap wigs, even though the wigs part is also true for Dudes and Dragons.

From the first minute to the last, Dudes and Dragons goes all in on its target genre. Almost every single scene and spoken line is a caricature or hyperbole of a sword and sorcery trope. Many of these are common to fantasy movies made between Conan to the Barbarian and The Hobbit, so even people who are not too much into the genre will probably recognize them. For good measure, a few spoofs on other movies such as 300 and Titanic have also been included. The humor occasionally drops to the level of fart jokes, but overall, it's more on the whimsical than on the crude side.

The actors play their roles enthusiastically with the proper straight faces and good sense of comedic timing. James Marsters of Buffy The Vampire Slayer fame gives a star bonus to the cast. His role is not the most challenging but still fun to watch. And as an additional star bonus, the late Luke Perry has a brief appearance in the prologue of the movie.

The movie was shot almost completely against a green-screen in a studio setting. This is visible most of the time, but it detracts not too much from the live action. Additional special effects are rather cheap, but they occasionally only add to the goofy charm of Dudes and Dragons. The action choreography and overall direction is professional, the flow of the movie is consistent and seamless within its means.

Dudes and Dragons is a fun romp through the epic fantasy genre. There's nothing truly special about it, but it's a charming homage that shows how high entertainment value can be created on a budget.