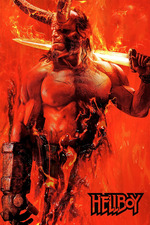 Hellboy is the third entry in the movie franchise, and the first without the involvement of Guillermo Del Toro who was in control of the first two movies as both director and writer. For this newest installment, which can be considered a reboot of the story, Neil Marshall took the helm as a director. Hellboy marks his return to the big screen after a nine-year hiatus. His earlier movies like Dog Soldiers and Doomsday were unashamed juvenile escapades of horror, action and comedy all mixed together, and he firmly stayed attached to this style also with Hellboy.

The Hellboy universe was always darker and grittier than the more popular Marvel and DC franchises, and the third Hellboy is not an exception. Marshall’s Hellboy is very different from Del Toro’s interpretation, however. This will understandably put off many viewers who loved the first two movies. The first entries had a strong focus on the personal struggles of a group of superhero outsiders packed into an incredibly atmospheric setting. The new Hellboy drops almost all drama elements, and chooses to be a silly, violent fantasy adventure instead.

The plot is not very original or exciting, it’s mostly Hellboy hunting monsters or being on the run from them. Production-wise there’s nothing to complain. The numerous CGI effects don’t always look convincing, but due to the fast pace viewers don’t get much time to notice this. There’s a creative variety of monsters, inspirations range from European fairy tales to Japanese monster movies. Another noteworthy item is the level of gore effects, which is remarkably high for a relatively big budget production such as this. There’s no scene that would qualify as overly shocking or gross, however, as state of the art CGI gore still looks artificial compared to practical effects. The cast is assembled properly, with David Harbour giving a joyful performance as Hellboy, as opposed to Ron Perlman’s gloomy interpretation of the character in the previous movies.

The new Hellboy character borrows a lot from the foul-mouthed and cheeky attitude of classic action movie characters such as Bruce Willis’ John McLane, and Mel Gibson’s Martin Riggs. This is one example of how Hellboy pays homage to the action classics of the late 20th century. In addition, it has a density of bloody violence and cheesy humor that has been rarely seen in an A-list production since the 1990s.

Marshall’s Hellboy never reaches the emotional depth or aesthetic mastery of Del Toro’s interpretation of the Hellboy universe. It also never aims to be more than a piece of old-fashioned, R-rated entertainment, in which it succeeds.