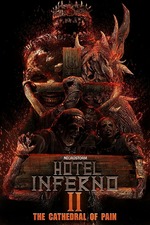 Hotel Inferno 2: The Cathedral of Pain

Production company Necrostorm has established itself as a major player in the niche of low-budget horror splatter movies since its debut Adam Chaplin in 2011. Its most significant trademark is that the amount of gore and graphic violence is usually dialed to the absolute maximum. One may like that or not, but it certainly makes Necrostorm a front-runner in this genre, and that's why we're going to have a closer look at one of its recent movies.

With Hotel Inferno director and Necrostorm mastermind Giulio de Santi managed to pull off an extreme horror movie completely filmed from the first-person perspective, two years before Hardcore Henry became somewhat famous for perfecting this technique. Hotel Inferno 2 also utilizes this perspective. The first Hotel Inferno is not that different from its successor, but it was not as consistent and seamless as the second part. With Hotel Inferno 2 De Santi shows a significant evolution of production quality and atmospheric density compared to the first part. The plot from the first movie is continued in the second one, but it is so thin, it really does not matter. And I would only recommend watching them back to back if you're really into this type of movies, otherwise you'll get double grossed out.

The first minute of the movie already properly sets the scene, as our protagonist wades through piles of severed body parts. After that, he mostly tumbles through dark hallways and chambers full of mutilated bodies and grotesque creatures. There's plenty of cutting, smashing, and shooting into enemies with subsequent eruptions of blood and gore. Overall, it's an extraordinary amount of mayhem displayed in Hotel Inferno 2, probably one of the highest accumulations of this type of special effects to be put in a movie until now. I feel that Hotel Inferno 2 comes close to maxing out on what's possible in that respect. The last third of the movie takes on a slightly lighter tone, as the action is ramped up and things become slightly less unappetizing. Additionally it's all fantasy horror that is on display here, and this takes the edge off things at least a bit. It also helps that De Santi avoids displaying sadistic violence or lengthy torture scenes.

There's a lot of things that may be lamented about the movie from the standard movie critic point of view even when disregarding the extreme violence. It's low-budget and lacks an engaging story or characters. The absence of these elements is not a detriment usually for splatter movies, as any overarching plot only provides a motivation for the next eruption of brutality. The minimal presence of characters and dialogues also prevents the occurrence of embarrassing moments in the acting department.

It's really on the atmospheric level where Hotel Inferno 2 shines. The movie leans towards the biblical interpretation of hell, and this abysmal atmosphere is captured surprisingly well. One other thing the movie has going for it that it's consistent in its execution. This is a difference to many low-budget productions that often seem to work with whatever they have a their disposal at a given time, and as a result the quality of the movie heavily fluctuates. The CGI are surprisingly well integrated with the practical special effects and the rest of the movie. The set design is visibly limited by the budget, but it pays a lot of attention to detail, so it shows that the crew took a really serious effort to put to together a convincing stage setting. Apart from the first-person style, there are also numerous references to old-school videos game liked Doom and Blood which are somewhat charming if you know the games.

Hotel Inferno 2: The Cathedral of Pain takes a top tier position in the subgenre of splatter horror, and outclasses practically any other low-budget gore flick. It will please gorehounds, fans of old-school video games, and probably no one else, but if you're willing to explore this nasty side of horror cinema, Hotel Inferno 2 is one of the best candidates to try out.