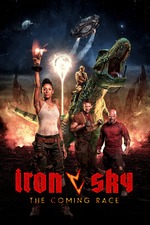 The first Iron Sky was an original take on Pulp Science Fiction. The story centered around space Nazis trying to conquer the earth, and was a quite unique affair. Its success spawned the inevitable sequel. Iron Sky: The Coming Race utilizes a whole new set of historical conspiracy theories and myths around the hollow earth, alien reptile shapeshifters, and the mystic material Vril that grants immortality.

It takes a while before things get going in the movie, the exposition is fairly generic Sci-Fi stuff. Once the Nazi UFO carrying refugees from Earth arrives, things get a lot more interesting, also because of the appearance of Udo Kier's character. When he is given a proper role, his charisma adds a lot to the entertainment value of any movie. And once our heroes board the UFO to go back to Earth, the movie really picks up momentum.

There's again plenty of campy humor in Iron Sky: The Coming Race, and it will be up to everyone's own taste if what is on display is funny or not. The sequences in the Hollow Earth are arguably the best ones, with dinosaur-riding Nazis, a chariot chase involving Osama Bin Laden and Margaret Thatcher, and a few more wacky ideas.

What is different from the first part is that The Coming Race is composed more of a series of fairly self-contained sequences that are only relatively loosely connected by the overarching plot. Also, the different conspiracy theories are not explored in a political context, so they serve more as a means to insert absurdity and humor into the movie. In these respects, The Coming Race is a more superficial affair than the first movie.

One thing that does not help the movie is that the main plot and the main protagonist are not very interesting. The character of Obi is incredibly sober, and strangely devoid of irony and humor in a movie such as this. This is particularly noticeable as everyone around her is cracking stupid jokes all the time. This makes the tone of the movie quite imbalanced occasionally, even though this is not a criticism of Lara Rossi's performance in her role as Obi.

Iron Sky: The Coming Race has many truly funny sequences, but also a significant amount of idle moments. Overall, it is a solid piece of craftsmanship that will keep viewers entertained, but is not able to replicate the verve of its predecessor.