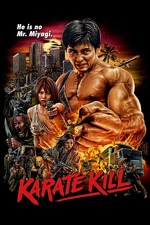 Kenji hasn’t heard from his sister Mayumi since she moved from Japan to Los Angeles, so he travels to the US to search for her. He finds out that she got involved with a local Yakuza boss, and has gone missing. Kenji picks up her trail, and with his almost superhuman karate skills he violently disposes of everyone that stands between him and her rescue.

Karate Kill was directed by Kurando Mitsutake who created a fairly extreme piece of Japanese exploitation cinema with his movie Gun Woman that came out two years earlier. Karate Kill is not as obnoxious, but also features plenty of sleazy moments. It is an action movie at its core, though, and benefits greatly from the martial arts prowess of its lead actor Hayate Masao. Numerous Japanese exploitation movies feature martial arts sequences, but these are often staged in a comical way (such as for example in Tokyo Gore Police). Karate Kill tries to be a serious affair, and also uses the United States as a setting for a change from the usual Japanese scenery.

Fifteen minutes into the movie we get to see the first large martial arts fight sequence. This one and all others are staged incredibly well, and lead actor Hayate Masao gets plenty of opportunity to display his impressive fighting skills. The start of the movie may lead us to believe this will be a fairly traditional martial arts flick, but once Kenji finds out where his sister has been taken, things get a lot more nasty. The first noticeable item is the brutality of the fight scenes, that include some gory moments, and Karate Kill adds to the list of ultraviolent martial arts movies emerging in the last years. There’s a couple of other really good fights, with a particularly impressive scene towards the end, when Kenji fights a martial arts duel in a shipping container whose walls are covered with barbwire, and that is loaded on a moving truck. And the final showdown features a throat-ripping scene that would make Dalton from Road House proud.

While Karate Kill already has its decent share of ferocious moments in some of the fight scenes, it turns up the knob even higher, frequently wanders into exploitation territory. This is achieved by going into full voyeurism mode when following the activities of the bad guys which include torture, mutilation and sadistic murders. There’s also plenty of nudity and some sex, so the movie delivers the complete bad taste package. While Karate Kill doesn’t bring anything new to the table in that sense, its combination of no-nonsense martial arts and classic exploitation cinema is quite original, at least it was for me.

The acting quality firmly adheres to B-movie quality standards, with no time being wasted on portraying any of the characters in detail. Especially the antagonists are just a bunch of grimacing psycho-killers, and together with their white-hooded goons easily obtain the “100% evil” certificate. The most well known members of the cast are Japanese exploitation icon Asami, and pro-wrestler Katarina Leigh Waters, who also play the most noteworthy protagonists. Asami’s character is a sexy elite soldier who wears a trench-coat, bullet belts, and a hook instead of a hand. She looks like a blend of Chow-Yun Fat’s Tequila character from Hard Boiled and Cherry Darling from Planet Terror. And her evil counterpart as played by Waters seems to draw a lot of inspiration from Kill Bill’s Elle Driver attitude- and attire-wise.

The movie looks like it was produced with a very modest budget. There are no large set pieces, but everything looks just good enough to render it a professional production. The majority of the funds seems to have gone into taking the time to perfect the fight sequences and their cinematography, which was money well spent. Every line in Karate Kill is delivered with a straight face, there’s almost no obvious comic relief. The controlled assembly of some apparently cheesy scenes indicate that director Mitsutake is certainly capable of irony towards the genre, though. A particularly notable moment is when Kenji meditatively practices his fighting skills. Instead of doing it against the classic martial-arts school-in-a-remote-forest backdrop, though, he does it in a cheap motel room, but with the same epic vibe.

Karate Kill gets a lot of its appeal from convincingly blending high-octane martial arts sequences with sleazy voyeurism. It is an adrenaline-filled, occasionally nasty little flick, that should entertain action and exploitation fans alike.