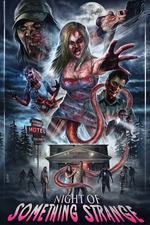 A janitor has sex with a deceased corpse in a hospital, and contracts a disease that turns him into a sex-addicted zombie. At the same time, a group of teenagers are en route to their spring break vacation. With sex and drugs being high on their agenda, they violently cross paths with the zombie at a motel, whose owners also display some rather eerie behavior.

The zombie movie genre has been oversaturated with movies and TV series in the last two decades, but Night of Something Strange manages to stand out from the background noise of lackluster zombie movies made in the 2010s. The movie was produced by Ron Bonk, who has been involved in numerous low-budget horror movies since the early 2000s as producer, writer or director, with telling names such as Ms. Cannibal Holocaust and Inbred Redneck Alien Abduction. Some of his movies already had plenty of funny moments, but with Night of Something Strange, where he acted as producer and writer, he also was able to pull off a good production quality.

The movie’s main premise is that the zombie virus is actually a sexually transmitted disease (STD) that turns it’s host into a sex-addict, and put the zombie’s weak spot at the genitals instead of the brains for a change. But If you’re expecting a movie that examines the rise of STD prevalence in recent years in a zombie movie template, you’ll be disappointed. What Night of Something Strange delivers instead is an insane blend of a teen sex comedy and a splatter movie, which turns out to be one of the best zombie movies from recent years. The idea of sex-addicted zombies is not new (as e.g. in the ultra-sleazy Japanese Rape Zombie: Lust of the Dead series), but Night of Something Strange manages to give it its own unique spin.

The movie is all about body fluids (really any sort), and the camera is always attentive to show where they are going and occasionally where they emerge from. There’s also rape (by the undead), necrophilia, and mutated genitals attacking people. All this sounds like the worst topics of a sleazy exploitation movie combined, and you certainly will need some tolerance towards this type of images if you want to make it even through the first five minutes of the movie.

Night of Something Strange just never stops with churning out one gross scene after another. But - and this may sound hard to believe - everything is staged quite light-heartedly, even the zombies have a moronic grin on their face all the time. Night of Something Strange may thus be considered a spiritual companion to one of the great classics of splatter comedies, Peter Jackson’s Dead Alive, which is still unsurpassed in that respect. And just as Jackson’s masterpiece, Night of Something Strange has great comedic timing, even though the humor hits many lows (but also many highs) during its runtime. And the resulting upbeat vibe really helps to digest the mayhem shown on the screen more easily.

The combination of weird sex scenes involving monsters and mutated body parts in a non-porn setting has also been popularized to some extent by Japanese bad taste mastermind Yoshihiro Nishimura in movies like Tokyo Gore Police and Mutant Girls Squad, so maybe the makers also drew some inspiration from them. As compared to its Japanese counterparts, Night of Something Strange is a much more coherent and clever affair, though. It’s also a good spoof on teen horror movies and stoner comedies, and there’s even an homage to the Texas Chainsaw Massacre as a small subplot in the movie.

Night of Something Strange is one of the funniest, if not the funniest zombie movie from recent years, if you can stand it’s gross and profane attitude. In any case, it’s a unique and creative contribution to the genre.