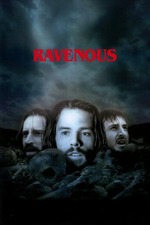 Movies that defy genre categorization sometimes have problems finding their audience. If one of those movies includes cannibalism as a central theme it will have it even more difficult. And when Ravenous was released in theaters, it tanked pretty hard. Voyeuristic and mostly dumb exploitations of cannibalism have been done before by many movies, but Ravenous is not one of them. Instead it uses the theme as a catalyst to deal with a variety of aspects about the human condition.

Ravenous starts off with a quote from German philosopher Friedrich Nietzsche, and Nietzsche's occasionally grim views on human existence and morality are very much in line with the movies' treatment of these topics. The overarching plot mixes the Native American myth of the Wendigo spirit with the story of Alferd Packer. Packer was part of an expedition that got trapped in the Colorado mountains in the winter of 1874 and resorted to cannibalism to survive. On the surface, Ravenous is a slow-paced horror flick, but the plot is utilized to examine several facets of human existence and behavior. The not so subtle statement of cannibalism as a metaphor for human greed and egoism is also there, and effectively interwoven with the horror plot. There are a couple of scares and gruesome scenes, but they are integral to the functioning of the story line. And it is a movie about people eating other people, after all. Despite all this Ravenous is not an extremely dark movie, there is quite a bit of black humor added for good measure.

The outpost is inhabited by troubled souls for the most part. Nihilism and pessimism are omnipresent in the dialogues between the characters and in their actions. I don't know if it was intended, but I find it interesting that every member of the fort's staff represents a singular measure available for humans to suppress their existential or other fears. Boyd's personality is more nuanced, and he may be the most interesting of the whole cast of characters. He suffers from serious anxiety, potentially even depression. He is certainly a good person, and one who does not fit into a cruel society dominated by ruthless men. He is exiled to one of the most remote places one can think of, but instead of finding peace he plunges into a nightmare that is even worse than his war experience. And the many absurd situations he finds himself in throughout the movie are tragicomic in the best sense.

The rather bleak story is framed beautifully by the monumental and seemingly endless snowy Czech mountains, where the outdoor sequences were shot. The execution of the movie is top notch, cinematography and editing leave nothing to be desired. The illustrious cast is led by Guy Pierce and Robert Carlyle, who both deliver impressive performances. Especially Pierce as Boyd portrays the ordeal of a constantly scared person laconically and with intense body language. The soundtrack also deserves a mention, as it features a multitude of wacky and unusual tunes that perfectly complement this eclectic movie.

Ravenous should be considered a timeless classic, but due its rather extreme subject, associated graphic violence, and absurd/depressive vibe, it's appeal understandably may be difficult to appreciate. But it certainly is an intelligent piece of genre cinema with plenty of "food" for thought.

Hotel Inferno 2: The Cathedral of Pain