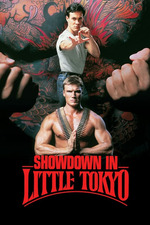 Mark L. Lester spent his whole career making fairly dumb movies with a few exceptions. He is now mostly known for directing the totally bonkers Arnold Schwarzenegger flick Commando. This movie was a complete exaggeration of 1980s action movie tropes even for its time I would say. It was so absurd that it renders the contemporary parodies of the genre like Commando Ninja and King Fury almost unnecessary.

Even so, several of Lester's movies have high entertainment value and one of them is Showdown in Little Tokyo. It's missing the superstar bonus of Schwarzenegger and also features more modest set pieces, but instead we get the unstoppable combination of Dolph Lundgren and Brandon Lee as cop buddies. The movie was another upward step in Brandon Lee's career, which ended tragically with a deadly accident while filming The Crow only a few years later. Even though his acting in Showdown In Little Tokyo was not of the highest level, he certainly had the looks, charisma and fighting skills needed to become more popular. Dolph Lundgren was also more or less at the top of his game at that time.

In essence, Showdown in Little Tokyo is a B-movie version of films such as Lethal Weapon and 48 Hours. But there's noting wrong with a good rip-off, and the movie delivers fully on the action front. There are numerous shootouts and explosions, and plenty of opportunity for Brandon Lee and even Dolph Lundgren to show off their martial arts skills. Classic moves such as throwing people through a shop window or into bar shelves are included as well, of course. The movie also doesn't take itself too seriously, which usually helps to mitigate flaws in other departments. The humor is quite corny most of the time, and some of the one-liners don't really take off, but it's all quite likable for the most part.

A big compliment goes to the wardrobe stylists for all the colorful, oversized suits and ties worn by literally all Yakuza members and police detectives in the movie. Except for Lundgren's character Kenner who walks around in a biker jacket all the time that he possibly kept from when he was shooting The Punisher. I also appreciate that the movie is pleasantly short, which makes sure there's no unnecessarily dragged out scenes and the tempo stays high all the time.

Certain elements of the movie may appear a bit offensive by today's standards. The not so subtle portrayal of Japanese culture with utilization of all (and I really mean all) cliches one can think of is one aspect. Another unappetizing feature is the implied rape of the movie's female protagonist, played by Tia Carrere, who attempts suicide afterwards. After being rescued by Kenner and Murata, she returns completely back to normal as if nothing happened, until the happy end. This course of events just seems misplaced and careless in a movie with so many comedic undertones.

Showdown in Little Tokyo is a fun old-school romp with plenty of action, low-brow humor and a good on-screen chemistry between Lundgren and Lee. It is a bit messy occasionally, but still is one the best efforts from director Mark L. Lester.