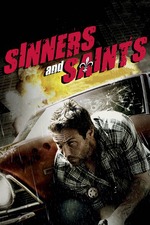 William Kaufman garnered some attention among low-budget action movie fans with his 2005 debut The Prodigy, that was an unusually intelligent and charismatic affair for this type of movies. It took five years before he made another movie, and in 2010 Sinners and Saints was released. Until now, this was the last movie where he was both in charge as a director and writer. Since then, he made a bunch of solid B-movies, but none of them were arguably able to approach the quality of his first two creations.

Sinners and Saints at its core is fairly standard action movie fare. A lone hero fights against a gang of sleazy overly muscular villains, and accumulates a substantial body count throughout the movie. There are plenty of stereotypical characters like the blunt, but well-meaning police captain (played charmingly by Tom Berenger), a crooked oligarch who is pulling the strings in the background (played by villain-typecasted Jurgen Prochnow) a couple of shootouts and close-combat sequences, and you got another run off-the-mill action movie? That's certainly one way to look it, but a closer look reveals how Kaufman brought in his creative vision to shape Sinners and Saints into something that is a lot better than what it may look like on the surface.

The first thing that is noticeable is the setting and its cinematography. Filmed in New Orleans, Sinners and Saints for the most part takes place in the bleak streets and run-down buildings of the poorer neighborhoods of the city. The devastation that Hurricane Katrina wrought on the city is also hinted at a few times in the movie. This setting provides a gritty, and occasionally depressive background to an equally dark plot. Kaufman manages to lift the relatively conventional story above average by throwing in crime elements with a bunch of particularly gruesome killings. The motives and background stories of the good guys are worked out in good detail, and convey some of the personal tragedies and desperation especially of the main protagonist Riley. They're not very nuanced character studies, but that's okay, as it's an action movie at heart, after all.

The action is solid, there are no big set pieces, but Kaufman orchestrates the shootouts and fight scenes with a great sense of timing. The cinematography in those scenes, but also in general has a very good flow, everything fits together smoothly. Main actor Johnny Strong is a good choice for the main character, he is a decent actor with a strong physical presence. The cast is complemented with energetic performances from Sean Patrick Flanery as Strong's troubled friend, and Louis Mandylor, who gives a charismatic performance as Riley's nemesis.

Sinners and Saints utilizes a standard B-action movie template, but is lifted above average quality by its intense atmosphere and excellent cinematography. It's a memorable achievement by William Kaufman, who hopefully will be able to pull off another movie like it at some point in his career.