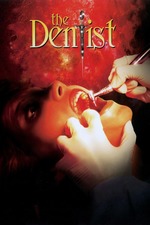 A visit to the dentist is a rather unpleasant experience in many cases. The pain from drilling and injections, and the uneasy feeling of losing control when someone is tinkering with your mouth all contribute to this perception. The portrayal of these issues can be quite terrifying in itself even without adding a horror theme to it. Brian Yuzna, who delighted audiences with many tasteless movies throughout his career, took the opportunity of closing this gap in horror movie history. He was not the first to utilize a lunatic doctor in a medical setting, movies like Dr. Giggles, The Unborn, and The Surgeon came out a few years before The Dentist. Those ones were closer to traditional slasher or monster movies at their core, though, whereas The Dentist features no supernatural elements.

Co-written by Yuzna’s long-term collaborator Stuart Gordon, the plot is incredibly formulaic, whenever a scene starts we can already tell how it will end. Every time the psychotic Dr. Alan shows up, things get a bit more interesting. But even then there’s no surprises, the movie just goes from kill to kill until the inevitable showdown. The unspectacular story is told using sober sets and one-dimensional characters that never say anything interesting.

These are all features that should make a movie instantly forgettable, but one may argue that The Dentist uses some of them actually to its advantage. The sterile, glossy look and insertion of erotic scenes makes one occasionally forget what sort of movie one is watching, and an absurd contrast is created with the torture and killing that goes on in Alan’s practice. The movie is almost completely filmed with a glaring lighting, which distinguishes it from the usual style of horror movies, where darkness is an integral element for the build-up of tension. Here everything happens in plain sight in neat, boring rooms. These are all nice tricks from Yuzna’s side to create an uncanny atmosphere, and a rather off-beat vibe for a horror movie.

The movie also works because it is fully centered on Alan’s transition from a narcissistic, cold-hearted person to a violent psychopath. From the onset, he is already fairly unstable due to his unhappy marriage and sexual frustrations. In that sense the movie only shows us the brief period before his full breakdown. Lead actor Corbin Bernsen performance is quite striking, and makes Dr. Alan Feinstone an almost believable character, even though he gets to indulge in the inevitable overacting, especially towards the end.

The practical effects are done uncomfortably convincing. There are not too many actually, but as they involves some really nasty things done to people’s mouths and teeth, they are extremely unpleasant. The movie doesn’t aim for laughs, but some scenes are so absurd that they can barely be taken seriously, so this takes the edge off things quite at least a bit.

Maybe it also was Yuzna’s intention to include some portrayal of the ugly side of the white-collar lifestyle like he did in his debut movie Society. While he succeeded in this with his portrayal of Alan, the interpersonal conflicts that are presented in the movie are too superficial to allow for any deeper reflection. The benchmark for this type of social commentary in a movie are the likes of American Psycho, but as Yuzna operated on a budget as with most of his movies, there’s no point to complain about this too much, I believe.

Despite an uninspired script, The Dentist makes an impression because of Corbin Bernsen’s vivid performance and the gruesome special effects. Just don’t watch it before the next appointment at your dentist.