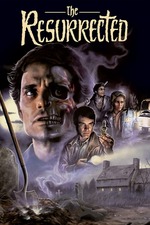 Dan O’Bannon was and still is a prominent figure among genre movie fans due to his contributions as a screenwriter for classics such as Dark Star, Alien and Total Recall. He also wrote and directed the cult horror-comedy Return of the Living Dead. After that, he directed only one other movie, which was the Resurrected. It’s based on the story The Case of Charles Dexter Ward by H.P. Lovecraft. This work of Lovecraft’s is not all-out cosmic horror, but features some very physical manifestations of it. Due to this, it may actually be one of the easier Lovecraft stories to be translated into the movie. Dan O’Bannon was also involved as a screen-writer in the 1997 wacky Lovecraft adaptation Bleeders. He sadly passed away in 2009, but hopefully will be remembered as an inspiring contributor to modern Sci-Fi Horror cinema.

The movie starts with the Noir cliche of a private investigator, who is trying to put together pieces of the puzzle. The detective elements are gradually dropped as the terrifying aspects of Wards machinations are revealed, and a chain of violent incidents is started. The Resurrected is story-focused for the most part, there’s no voyeuristic scenes of violence or misplaced comic relief. In that sense it’s a refreshingly old-school affair. It may seem like a fairly conventional horror story at times, but that is partially due to the movie sticking fairly close to its source material, which was created by Lovecraft in 1930.

The creature special effects are top notch. The grotesque monsters and abominations look absolutely terrifying. By fully visualizing the results of the bizarre experiments the movie distances itself slightly from pure Lovecraftian horror where horror is omnipresent but rarely manifested in physical form. This is not really a negative aspect, though, also as the monster scenes are embedded properly into the story

The Resurrected is an unspectacular, but skillfully crafted adaptation of a Lovecraftian tale. It is a compelling and haunting movie, and another testimonial to Dan O’Bannon’s formidable creative vision.