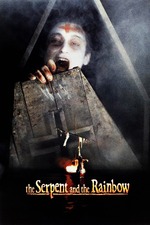 Between A Nightmare on Elm Street and Scream, Wes Craven directed a couple of horror movies that did not receive as much attention or acclaim. That doesn't mean they were bad, quite the opposite, and one of them was the Serpent and the Rainbow. On the surface, Craven is telling a fairly conventional horror story against the backdrop of a land in the grip of a dictator. But there's actually a lot more to it.

The Haitian setting may raise suspicion that Craven took a misstep into a conventional zombie movie, but nothing would be further from what this movie is actually about. While the traditional Haitian voodoo and zombie legends are utilized for the plot, their purpose in the story is revealed only slowly, and displays political implications that are very different from pure social commentary such as in George Romero's utilization of the zombie genre.

Supernatural horror and state politics is a rare mixture, I actually cannot think of another movie that entangles these themes in such a concrete way. Until the 1980s, Haiti was considered an ally of the USA mostly because of their strong opposition towards the communist Cuba. After the resignation of dictator Jean-Claude Duvalier the Reagan administration was quick to denounce him. Even though this moral ambiguity is not addressed in the movie, it at least puts the struggles of the Haitian people into the spotlight, as the movie plays just before and during the political turmoil around Duvalier’s downfall.

The notion that the Haitian regime was employing voodoo practices is actually rooted in reality. Jean-Claude Duvalier's father Francois recognized voodoo as a state religion. In The Serpent and the Rainbow, this is reflected by having Duvalier's secret police use supernatural powers to cement their hold over the people. This is a fairly unique point the movie has to make, and makes it all the more chilling.

Partly shot in Haiti, one of the movie's other strong points is the depiction of Haitian culture and rituals. Many aspects may be perceived as uncanny by viewers not familiar with it. Some scenes take on an almost documentary style, which only adds to the immersion and intensity of the movie.

The plot evolves at a good pace, a lot of things happen, and there's no unnecessary ballast in the way of the story. Occasionally the movie gets the vibe of an adventure movie, as the characters explore a variety of locations in the tropical setting. The horror itself unfolds rather steadily, and works without almost any amount of gore and jump scares. There is a torture scene that is pretty intense, but properly embedded into the story.

The acting is pleasantly modest, with no hysterical performances. Bill Pullman in one of his first roles almost stoically floats through the movie, and valiantly endures any hardship Craven throws at him.

The Serpent and the Rainbow is a unique combination of traditional horror tropes embedded in a very concrete political context. It is a non-chalant but excellently staged piece of horror cinema from Wes Craven, that excels at telling its story in atmospheric and dreamy pictures.