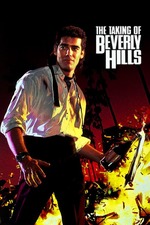 Director Sydney J. Furie had a long career in Hollywood, and became mostly known for directing the Iron Eagle series. He surely knew how to convincingly stage what we would now consider traditional 1980s action movies. The Taking of Beverly Hills also falls into that category, even though it was shot in 1991, so it came a bit late to the party.

The setup of a heist organized around the evacuation of a complete town without anyone else from outside noticing is not very believable, of course, but it matters not. The Taking of Beverly delivers on other fronts, and then fully. It looks like the pyrotechnics and stunt departments were the most important units in the whole movie, and there a few impressive set pieces indeed. Furie also got hold of a SWAT tank for the movie, and its destructive power is heavily utilized, as it's plowing through cars, walls and houses whenever it is on screen. Half of the movie is a street chase with explosions and car stunts chained into each other.

Strictly speaking, there is zero originality to be found in The Taking of Beverly Hills, it just ticks all boxes you would expect from your typical American 1980s action movie, including an overdose of macho talk and a kitschy soundtrack. The dialogues and characters are also as cliche as they get. That's no problem, however, at least there are plenty of cheesy one-liners in the script to keep the conversations entertaining.

As for the actors, Max Frewer and Ken Wahl in their respective roles a cop Melvin and professional football player Boomer have a good on-screen chemistry as involuntary allies against the robber squad. Boomer also carries an impressive mullet that seems to be indestructible, as it is perfectly groomed in every single scene. In the bad guys department, Robert Davi shines in his usual role as cultivated, but treacherous antagonist to Boomer and Kelvin.

The Taking of Beverly Hills is one of the last representatives from the era of old-fashioned action movie entertainment. It's silly, uncomplicated fun, and if you're easily pleased by professionally staged mayhem and destruction, it's certainly worth a watch.