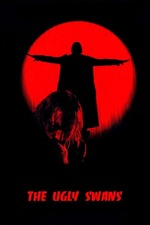 The writer Victor Banev is sent on a mission as a UN observer to the city of Tashlinsk. A weather anomaly casts the town in constant rain and darkness, and a group of cloaked, uncanny people, the Wetters has appeared there. The Wetters have taken the children of the local boarding school under their wings, among them Victor’s daughter. Since then, the children have developed extraordinary intellectual abilities and even supernatural powers, and are perceived as a threat by the military and some scientists that are stationed at the site.

The Ugly Swans is based on a novel of the same name by Boris and Arkady Strugatsky. The two brothers are writers of seminal works of Russian Science Fiction, and several of their books were adapted into movies. The story of The Ugly Swans shares some similarity with another of their classics, Roadside Picnic, most notably the existence of a mysterious zone where strange physical anomalies occur. This novel would ultimately serve as a template for Andrei Tarkovsky’s masterpiece Stalker.

The Ugly Swans was directed by Konstantin Lopushansky, who created two other dark classics of Eastern European Science-Fiction cinema, the post-apocalyptic dramas Visitor To A Museum and Letters from A Dead Man. These movies were thoroughly depressing, and for the most part a philosophical treatise on the human condition. While The Ugly Swans has a very similar vibe, it is certainly a bit more straightforward than its peers. It still invites you to develop your own thoughts and interpretations about what’s happening on the screen.

The story follows the journey of its main character and his reactions to an almost inevitable progression of events he has to witness. There are some elements of personal drama, and a few scenes filled with tension, but the movie’s main purpose is to present the numerous dialogues between the protagonists that are either trying to understand what’s going on inside the zone, or deliberating on how to deal with the situation. The mutant-like Wetters and the children they are taking care of display an intelligence and insight into worldly matters that are impossible to achieve for all other humans. Their alleged superiority is generally met with hostility or other sinister reflexes by the people in charge in the zone.

As the story unfolds, the incapability of humans to deal with something beyond their comprehension in any other than a destructive way becomes frustratingly apparent. The uncomfortable interactions between the characters and their growing confusion and resignation are magnified by the somber setting Lopushansky creates as a backdrop for the movie. The utilization of a deserted, decaying town, and the constant rain and darkness create the ultimate depressing location.

The Ugly Swans is another great movie from Konstantin Lopushansky, and an excellent example for a Science Fiction movie that uses its premise for a gripping study of human psychology and philosophy, with a rather perilous outlook in this particular case.