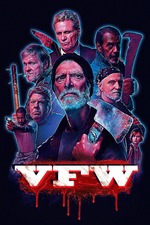 VFW does not hide that it's an homage to John Carpenter's Assault on Precinct 13, with the dystopian setting of Escape From New York added to it. Assault on Precinct 13 is so old by now that many viewers of VFW may not even know it exists, so the time was right in any case for a new version. While there has been an official remake of John Carpenter's classic in 2005, it was a very different movie from its predecessor. It dropped the uncanny atmosphere and was a well-done, but fairly conventional action thriller. VFW tries to re-capture the bleak and desolate atmosphere of its forerunner and adds a few additional items needed for a timely update. The siege of a bar by inhuman creatures has also been staged memorably in Robert Rodriguez' cult classic From Dusk Till Dawn, so there's another movie VFW may have drawn some inspiration from. Blaxploitation icon Fred Williamson had a prominent role in it; he also starred in VFW, and seems to almost reprise the same character he played in From Dusk Till Dawn.

Just as with Assault on Precinct 13, there's not much plot to go around in VFW. The movie rather focuses on how the distressed protagonists deal with the terrible situation they're confronted with. The siege theme is properly executed, as the bar visitors are relentlessly terrorized by the faceless horde. The action sequences are ultra-violent with plenty of gory scenes. The violence is so over the top, it's almost comic-like, and together with some well-timed humor provides some elements that take the edge off the movie quite a bit, at least if you're not squeamish about exploding heads. The cinematography is generally good with an appropriate sense for providing a somber but also intense atmosphere. Only the action scenes leave a bit to be desired, many of them are filmed to too choppy and dark, sometimes it's difficult to see what's going on at all.

The characters are drawn out properly, and their friendship and compassion for each other makes one really feel with them. Their courageous approach in facing the threats and sarcastic humor occasionally gives the film a slightly positive vibe that breaks through the bleak setting. The choice of actors and their nostalgic reflections are two of the movie's strongest points. Lead by Stephen Lang, every cast member is enthusiastically playing their part, and it's great to see veterans such as William Sadler and Martin Kove in main roles for a change. Only cult actor Fred Williamson does not really fit in well, as he gives a slightly apathetic performance.

Apart from its premise, VFW goes all in on post-modern movie making with it's 1980s retro-style look and music. There's neon lights, aerobic videos, cheap leather jackets, and a thumping retro-wave soundtrack by well-known genre composer Steve Moore. Sometimes it tries a bit too hard, but in general these elements add a playful vibe to the movie. The production values are fairly modest, almost all scenes happen inside the bar or on the parking lot around it, but everything is staged professionally and efficiently.

VFW never fails to be an entertaining movie; it looks good, there are some cool and funny lines, and we're treated with plenty of thrills and action. There are no plot twists, no additional layers, everything in makes for a refreshingly straightforward movie. Despite its looks and the extreme violence, VFW is not really a scary or particularly disturbing movie, but a solid action thriller.