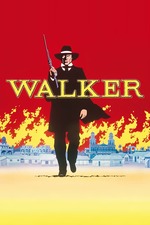 William Walker is the self-proclaimed savior of Nicaragua. With financial support from railroad tycoon Cornelius Vanderbilt he leads a squad of mercenaries into the country, overthrows the government, and installs himself as president. Before long, his volatile temperament and erratic behavior plunge the country and his people into unimaginable suffering.

Walker is based on the biography of William Walker, who appointed himself president of Nicaragua in 1856 after invading the country. And while the key fact of his invasion of Nicaragua is correct, everything else in the movie is more or less made up. Walker was directed by Alex Cox, who received critical and popular acclaim for his earlier works Repo Man and Sid & Nancy. After that he made Walker, which was an all-out attack on the covert activities of the US in Central America at the time. Another movie that approached this topic in a less aggressive way was Oliver Stone's Salvador (released in 1986). The careers of their respective directors would take very different paths afterwards. Cox was blacklisted by Hollywood after finishing Walker, whereas Stone established himself in Hollywood as creator of top-tier political dramas and thrillers, and even won an Oscar.

One can ask what harm a movie like Walker could have done when it would have been released alongside an avalanche of 1980s action movies (such as Commando and Missing in Action) that took an openly interventionist stance with one-man armies going on rescue missions into enemy territory. It apparently was considered not suitable for release, though, and the movie was locked away by its production company Universal Studios until 2008, when it finally came out in the US on DVD. Ironically, at that time it could have been a well-timed reminder for the problematic US military campaigns in Iraq and Afghanistan, if anyone had taken notice of its release.

From the beginning of the movie Cox makes it very clear that it is not a biopic but an assault on US-American foreign policy as exemplified by Walker's occupation of Nicaragua. The movie still takes its time to sketch Walker's transformation from a misguided intellectual into an archetypal dictator. A charismatic, restless man presents himself as an idealist to everyone, and maybe even believes it himself. After seizing power he gradually turns into a bloodthirsty and paranoid tyrant, and goes completely insane as his downfall approaches. Walker's personal story mostly serves as a catalyst for discussing the ambitions of the US in Central America. His initial dialogue with railroad tycoon Cornelius Vanderbilt already reveals the true nature of the planned intervention and Walker's expected role. His task is to overthrow a politically inconvenient regime by any means necessary, and to establish a rule that promotes economic activities for the US in Nicaragua.

Of course there is no need to side with Cox's point of view, but if you're inclined to completely disagree with every political statement the movie brings to the table, you will have an extremely hard time watching it. The movie is overloaded with political dialogues and coarse symbolism, and the sharp script by Rudy Wurlitzer's script brims over with cynicism. A great example is the portrayal of Walker's deaf and mute wife as the only voice of reason in the entire movie. Almost every scene has its moment of absurdity or hysteria, yet Cox always manages to get his point across. Despite the serious topic, Walker is not a sober affair at all, there's plenty of violent action and absurd humor. The last part of the movie turns completely surreal with feverish dialogues and apocalyptic images composed of blood and fire. To make things even more bizarre, Cox also gradually introduces anachronisms of modern US consumer culture and military equipment into the 19th century setting.

Ed Harris as William Walker gives the best performance I've seen from him so far. His portrayal of Walker's conflicted character is intense and uncannily believable for the most part. He is accompanied by a great ensemble cast that enthusiastically joins the madness. The movie was shot in Nicaragua, and the production quality leaves nothing to be desired. Cox was able to create some impressive set pieces using historic locations and scenic landscapes. The soundtrack by punk rock legend Joe Strummer is the icing on the cake. It's a playful and often relaxing reggae-infused sound that provides at least some relief on the audio track from the disturbing images.

Walker is one of the most subversive pieces of celluloid to ever come out of Hollywood, and even today remains an incredibly relevant contribution from Alex Cox to political cinema.