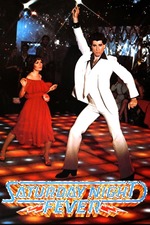 The year 1977 might have been (at least, to me), the greatest year in film history, in terms of quality output. 1977 saw the release of Star Wars, Annie Hall, Suspiria, Eraserhead, Saturday Night Fever, and Stroszek, just to name a few of my very favourites.

Saturday Night Fever is probably not remembered among the greatest films of 1977, but I unironically love this movie. The film has become a cultural joke since its release forty years ago, but it is so much more than the overly-referenced disposable piece of kitsch that it has become known as.