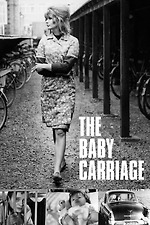 It's nice to see some non-Bergman Swedish classics from time to time, especially when they're dealing with more contemporary people and problems, rather than age-old philosophical conundrums. In that regard The Pram delivers, though it's not half as frivolous and energetic as I'd hoped.

The story revolves around Britt, a young girl who loves her newfound independence and doesn't mind having a couple of flings at the same time. Things change when she finds out she's pregnant. Suddenly she is forced to choose what to do with the rest of her life, a commitment she's not quite ready to take.

Some snappy editing and a jazzy soundtrack give the film a more modern flair, but the stark camera work combined with black and white cinematography and the stern performances make it more rigid than needed. There are some fun stylistic touches here and there, but the focus of the film lies on the characters and I simply didn't care much for them.