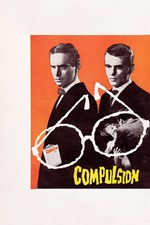 Compulsion is an unusual film, and not at all what I expected. Not that I even knew what to expect, but for some reason I thought this was a crime thriller that might cross over into the horror genre a bit. I misunderstood on that count.... nothing of the kind there.

But this is a neatly packaged account of an actual criminal case, probably repainted somewhat with artistic licence, but still rather compelling. It's the story of two rich young law-school students who are on trial for murder. We the viewers are complicit... we know what's going on... but the real trick comes over halfway through the picture when Mr. Orson Welles, attorney, takes on the defendants and delivers the usual impassioned Hollywood courtroom speech.

Director Richard Fleischer, responsible for dozens of notable films over the decades, handles this story with some shifty moves. He creates scenes that sometimes feel too obvious, but there is often an element of uncertainty chewing at the viewer's confidence in what he or she is seeing or hearing. A young Dean Stockwell plays the more unbalanced of the accused pair, assuming a rather sociopathic identity and playing it to the hilt... entertaining, but sometimes a bit much.

Fleischer sort of pre-dates Hitchcock's Psycho here, with some taxidermy and the innocent-looking nut-job. Initially I wondered about that - and wondered what year this film came out - but I was surprised to see this was released a year before the Hitch classic.

An interesting movie that keeps you guessing. Welles has done better, but he does tend to dominate any scene he's in, regardless of how well he delivers. Some fun.