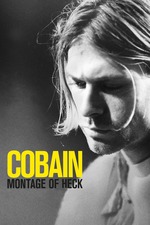 Excellent, emotional documentary on Kurt Cobain as a human, rather than an icon or the fallacious 'voice of a generation'. MONTAGE OF HECK succeeds where so many other documentaries on the subject have failed, in that it communicates what made this man so unique with his actual diary entries and animated doodles. In this capacity, we're given a raw, comprehensive and unprecedented look into how his existence got to be so tortured, and yet so ironically aggrandized by the masses. It follows the story beginning with old home movies of his parents to Cobain's own youth, covering each major period of his development until the climactic precipice that was the release of NEVERMIND.

MONTAGE OF HECK is as dark as Cobain's life ever was, but never attempts to paint a distorted image. The plentiful archival footage and personal memorabilia is the sort-of ugly, wholly un-glamorized sort of stuff you'd never expect to emerge out of a vault. This is a major treat, even if it does have the potential to be off-putting. The monotonous discourse typically found in documentaries about 'life in the band' or tirelessly recording is replaced with a focus on Cobain's individual thoughts and perceptions. MONTAGE OF HECK takes an invaluably internal view on one of the most influential musicians in rock music. He's depicted as weirder and more of an outsider than the general public has ever seen him, and yet simultaneously, immensely more genuine.

The segment with Courtney Love might just be the most profound, if only for how unbiased, gross and sweet it is. Throughout this documentary, Brett Morgen doesn't submit a personal stance in evaluating Kurt or his legacy, and MONTAGE OF HECK benefits greatly from that respect. What we are shown is Cobain's life as he dealt with and imagined it, supported by interviews with friends and family that provide information that was largely already known, but important in forming a framework. And being that this is a documentary that presents highly publicized, controversial events merely as they happened without opinion, makes it particularly rare. For instance, Cobain's heroin use to self-medicate his stomach pain isn't criticized or condoned, but merely shown in explicit, unnerving detail.

As a raw, personal document, MONTAGE OF HECK is one of the most successful music documentaries I've ever seen. While it doesn't so much elucidate on the actual happenings of Cobain's life, it presents an unparalleled adaptation of his innermost thoughts, fears, and creativities. It's visually stylish in translating his many, many hand-drawn and scrawled logs into the cinematic medium, making superb use of blurs and fade-outs, cutting at just the right moments. A must-see.