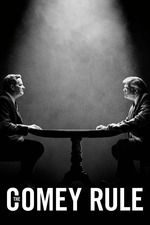 I'm torn, because this was handsomely produced, but also... mega cringe? Gleeson actually ends up being one of the best parts of it - what could be a laughable SNL parody is lent odd gravitas by a meticulously detailed performance played entirely straight, not for laughs. The first half is definitely the most chock-full of cringe, focused almost entirely on the Clinton email investigation with so many "easter egg" nods to headline events surrounding it (Strzok/Paige, other senseless cameos, mustache-twirling Russians talking in awe about how they managed to hack Facebook while sitting on the Washington Mall, I shit you not) - but overall... yeah. Not good, certainly entirely unnecessary and too soon, but also... weirdly watchable?