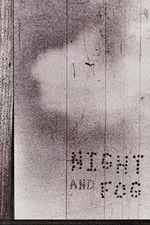 The renowned film critic Jonathan Rosenbaum once claimed Alain Resnais's short documentary Night and Fog as “ the greatest film ever made about the concentration camps… Claude Lanzmann’s 1985 Shoah is so indebted to this film that it never could have been conceived, much less made, without Resnais’ example, and Schindler’s List is a cartoon alongside it”. That recalls my recent excruciating memory in watching the Hungarian Holocaust film Son of Saul, where "living" through the inferno much worse than the one written by Dante is not an experience I look forward to revisit any time, yet it is essential to look and learn beyond any Hollywood "cartoonish" adaptations.

Once again it's the moral question of filming the atrocities or not, specifically the Holocaust where millions of Jewish lives were lost. Night and Fog was released 10 years after the end of World War II and the discovery of the concentration camps, the memories, in 1955, was still vivid and fresh. The film is interwoven between the present in 1955, represents by the colour image of the ruins of the concentration camps, and the past, the monochrome stills and footage spanned from the rise of Nazism to the pile of lifeless bodies at the end of WWII.

Narrated by actor Michel Bouquet in a neutral and non-urgent tone, the commentaries, written by the concentration camp survivor Jean Cayrol, evoked the underlining hollowness and unfathomable pain by stating the formal industrialized plan executed by the Nazi. From the architecture and construction of the concentration camp, the logistics of impounding the victims, the suffering of the inmates, to the "Final Solution". The alienated calmness, a protective mechanism against the horrible past, draws attention to the film's authenticity that fictional adaptations could not.

"Who should be responsible for the Holocaust?" is the question asked at the end of the film, and should be asked continuously in the future. As one could witness from the genocide in Cambodia or Rwanda, there is no straight forward answer, nor solution for complete prevention. The thirty-two minutes documentary encapsulate the human atrocity that should only be relived in the past, for the sake of a better future.