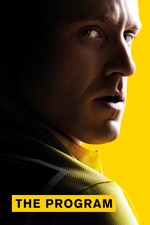 The performances are definitely the most engaging part of this film that kept me interested in the story. Jesse Plemons, Chris O'Dowd and especially Ben Foster are really great to watch especially when the film gives them space. The thing is all the performances are in service of the film's story, which is more of a tense political drama about how Armstrong was found out. I didn't really learn anything about Armstrong and his motivations, you don't really get much insight into the character's mind. The film just kind of tells you everything you need to know and you go from there. That being said the drama, carried by the performances, was engaging, it just ended up feeling too empty.

There were a couple odd choices and some strange shots here and there but the cinematography was ok, the races were shot fairly dynamically. A few strange scenes involving commericals that Armstrong was in and an Italian racing doctor reading bible passages about god as he injected drugs were really weird and I didn't really buy them. Overall would probably ask the film if it wanted to get up early for a bike ride rather than eating crackers in bed.