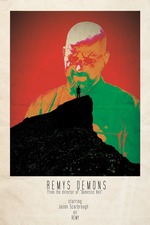 If there’s any genre that can benefit from having a low-micro budget, it’s the horror genre. Horror often looks to portray itself in a very raw way that is close to home and the student-project style often can work very well. Take the endless amount of found-footage flicks within the genre as examples.

Outside of the Hollywood realm however comes movies like Remy’s Demons, directed by Colin Bressler with his third movie on Amazon Prime which, with an actual micro-budget, manages to create something original with moments of genuine terror. Telling the story of the titular Remy, an autistic 40 year old man with a fascination for the supernatural brought on by his witchcraft-obsessed mother whose health is now failing. He struggles to balance the demons that he can see from the other side and the ones that exist in his own life, which is full of eccentric characters all with their own demons. The film does a good job of creating that parallel.
There is a fair bit going on here and each character has their own motives especially when it comes to Remy, whose day job is giving tours of places where crimes happen, whilst demonstrating his ability to be attune with the spirits that may be lingering there.

Remy’s Demons actually turns out to be much deeper and more philosophical than these things tend to be. It is not necessarily a “horror” movie but uses horror as a backdrop to a coming-of-age story. The idea of an autistic person in this role is an interesting concept and one that has not been properly explored before as far as is known. It can be easy to overdo a performance regarding a “condition” but Jason Scarbrough does a great job in portraying Remy delicately in a natural way.

In regards to the rest of the cast, some are better than others but the standouts here aside from Remy are Magda Porter as Remy’s mother Regan and Aisha Love as Vera, a woman also interested in the so-called “other side” who becomes a love-interest for Remy after they meet in the local cemetery.

The strongest parts of the movie arguably are the use of lighting and colour, the scares that pop up (literally) during the latter half and its soundtrack. Remy’s Demons, whether intentionally or unintentionally, gives off strong 70’s cult-horror B-movie vibes. The film feels very old-school complete with said vivid red and purple lighting during some scenes along with candles and other witchy ornaments. In this respect, it could be comparable to 2016’s The Love Witch, which set out to achieve a similar aesthetic.

The scares are as good as any big-budget Hollywood production with excellent camera work; really catching you off-guard and the soundtrack does a wonderful job building a highly ominous atmosphere and keeping the viewer anxious even when nothing is really happening. The appearances, specifically the first, of the horned demon seen in the Amazon Video poster are also genuinely chilling.

There are a few hiccups here and there especially when it comes to the sound department, which can be a little distracting. As mentioned earlier, the film does present a lot of ideas and these seem to be building up rather unclearly for perhaps a little too long before culminating in just the last 20 minutes or so.

Overall Remy’s Demons is a well done albeit rather ambitious movie that does a lot of things very well but with those moments of brilliance, there are also a few moments that could’ve been altered or perhaps left out entirely. Definitely worth a watch and Bressler deserves applause for tackling some unexplored territories.

The Forest of Love