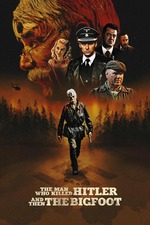 You'd be forgiven if you thought that what would present itself is a guns-blazing, action filled exploitation flick- and there are times when it begins to feel like one, giving a few nods to the editing style of old-school grindhouse. 'The Man Who Killed Hitler and Then the Bigfoot' feels like at least one of those two concepts could have been removed, like director Robert D. Krzykowski had two ideas for two movies and was told that the studio budget would only allow for one, and that conversation abruptly ended with "Say no more!" The two halves do indeed feel disconnected like different movies; with the former concept seeming to serve no real purpose other than an attempt to give the character some substance further than just being a clichéd war veteran.

Starring Academy-Award nominated Sam Elliot in an emotional role with melancholic tones as said war veteran Calvin Barr in 1987 who, as the title suggests, was responsible for the end of World War II. In the present day, he is lonely with a close but also distant relationship with his brother (Larry Miller) and is haunted by PTSD as slick flashback transitions reveal the past that he is remorseful of, and he does not claim any pride over the aforementioned matter.

When he is approached by agents to carry out one last mission, they are met with hesitation and his affirmations that he wishes not to be associated with that life or any reflection of it anymore. Regarding the actual beast in question, the story is far more convoluted than one would expect. As is suggested, he of course accepts the mission and well, it needs not be said what happens afterwards. This version of the big foot is far more ghoulish than beast like and as exclaimed, "doesn't have big feet (either), not really living up to its name" which actually makes sense considering said convoluted story. The actual confrontation reaks of low-budget drive-in theatre B-movie and seems rather distant to the rest of the affair, however it is short enough that it doesn't become overly absurd, and ends with a gorgeous, utterly cinematic shot (no pun intended).

'The Man...' is not what you'd expect but not necessarily in a bad way. What you get is the story of an ageing veteren living with his regrets over the demise of the Führer as well as his failure to propose to his love (portrayed by the wonderful Cailtin Fitzgerald) before leaving for the war.

Overall 'The Man...' is an ambitious film that sounds ridiculous, and is, but is handled in a way that doesn't exploit either of the ideas too much. But at the same time, they don't seem to ever really come together, existing as separate entities within the same 90 minutes. Perhaps exploiting them in that over-the-top way would've made for a better movie, but the one that we got is an enjoyable, albeit not overly memorable one, with some beautiful visuals and fantastic performances.