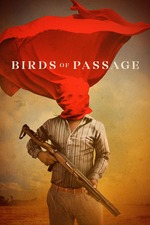 A true technical masterclass, especially but not limited to the team behind the cinematography and sound design. Truly off the charts stuff, if Terrence Malick is looking for a new DP after A Hidden Life and wants to give a big break to a relative unknown he should look no further than David Gallego. Gallego on more than a few occasions delivers images worthy of appearing under Malick’s film umbrella.

On the surface Birds of Passage appears to be a film about drugs and greed and of course it is but digging a little deeper the film shows it’s true ideologies which lie prominently within religion, respect, tradition and superstition as well as showing how ones faith, or lack there of can get the better of them when under pressure or when mixed with greed.