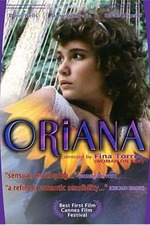 Uppon hearing of her aunt Oriana's passing, Maria returns to the hacienda where she spent a summer as a young teenager.

This Venezuelan family drama/mystery was the debut of Fina Torres, who won the Caméra d'Or for it at the 1985 Cannes film festival.

Oriana is a beautifully morose and atmosheric movie that weaves three different time periods effortlessly together. First we see adult Maria arriving at the hacienda with her partner. As she walks around the empty rooms, we slowly begin to see bits and pieces of Maria's visit those many moons ago, until finally, the movie shifts its focus on that time period. We watch young Maria explore the grounds and interact with her enigmatic aunt. It appears Oriana is a woman with a dark secret. Maria, being the inquisitive person that she is, naturally tries to find out as much as she can. Now we start seeing fragments of young Oriana's tragic life.

The movie is deliberately slow, filled with many lingering shots. Although not a lot happens here, the mystery is always intriguing and it was never once dull. Another reviewer described this as a ghost story, where the ghosts are memories and loss, which is really a wonderfully apt description.

In the end, Oriana is just a beautiful movie that I think everyone should check out.

The Haunting of Sarah Hardy