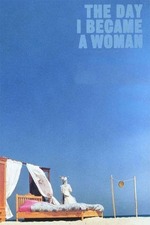 This is an amazing piece of film making. The first of it's anthology of stories, about a girl, an intelligent, curious, logical nine year old girl, being told she is now a woman and can no longer play with boys or walk on roofs or where the clothes she had previously worn, is touching and absurdly funny and beautifully made but also something we have seen before. Something that plays into our preconceptions about Islam and about patriarchy, something that makes you nod about your long held ideas.

It's young actress reminds you of the children in other iranian films, they're all about kids aren't they, of the White Balloon, or of the girl in Wadjda or the girls in Mustang. And it's an important story, and it obviously is the root of all the other stories. But it's familiar and invites you to laugh at the absurdity of the system, in the way these films do but also Polish or Romanian or Czech films do, because different forms of oppression share common grounds .

The second story doesn't do that. It's images of a peleton of Niqab wearing women on bikes are striking, there is absurdity in the words of the men on horseback telling one of the riders to stop or face divorce. But then it changes, the peleton falls away, there are just two women left, our focal character and another riding ahead with headphones in unable to hear the threats and pleas. The two women share some time and then two horses pull up on the road ahead of them and it's a shattering moment of cinema.

Suddenly the system is no less absurd but you don't get to laugh at it any more. The one woman cycles up to them and past them and the camera goes with her, the other, our focus, is stopped by them and we only see her and them in long shot as the other woman looks back, further and further past them. And it's one of the most affecting scenes in cinema that I can remember. We don't see details, we fill them in, but the woman's rebellion is ended.

The final act, of an old woman, followed by street kids, buys up the things she has always wanted but was never allowed to own and lays them out on the beach before sailing away completes the circle, tells us that yes, for decades people might do without freedoms and agencies but that the desire for them doesn't go away. It's interspersed with absurdity again, the streetkids playing house with her goods, acting out female roles, the domestic female roles that are the only ones on offer before the old lady and her final act of rebellious agency head off to sea. Freedom only coming in fantasy.

It's an incredible film, its beautiful, full of striking images and colours and performances. It takes aim at youth, adulthood and old age and skewers all of them, with anger and for one minute with undisguised honesty about the threat of violence, but also with humour and warmth for it's characters, male and female.